The first “skyscraper” by “Alexander Shorokhoff” is extended. The already known and almost sold out automatic double time watch “Levels”, which is determined by different levels of the dial, now gets two more color siblings: The unusual basic colors of the dial, grey and golden brown, were not chosen randomly.

Limited Edition of only 99 pieces.

LEVELS – The first “skyscraper” by “Alexander Shorokhoff” is extended.

The already known and almost sold out automatic double time watch “Levels”, which is determined by different levels of the dial, now gets two more color siblings: The unusual basic colors of the dial, grey and golden brown, were not chosen randomly.

Johann Wolfang von Goethe already wrote in his color theory that grey is one of the best colors because all other colors appear splendid on it. And the new gray “Levels” model confirms it: the colored stripe in an indeterminate form comes out gently but determinant, thus emphasizing the importance of the gray color. The different heights of the “Levels” have been balanced in a rose-gold hue to complete the look. The grayish-bluish genuine crocodile leather strap remains in the shadow of the watch, drawing all attention to the dial. Overall, the new colors make the model look very harmonious, light and elegant.

A warm golden brown tone was chosen for the second new version of the Model level. It radiates warmth and touches the soul of the observer and wearer. This is exactly what Alexander Shorokhov wanted to achieve with it, who has already touched the soul of people through several such extraordinary compositions. But also here the new color combination appears very harmonious, because the different levels in a cold silver tone balance the overall picture. Freely based on the motto of V. Kandinsky: “Color is a force that influences the soul”. And Alexander Shorokhov succeeds in this again and again. Colors are his strength, his philosophy.

As with the previous model, the different levels are supplemented by a calendar window, which has its position at the highest level. Through the creatively built in magnifying glass, the relatively small date of the refined ETA – movement 2671 can be enlarged and is therefore easier to see. The magnifying glass resembles a monocle and thus underlines the creative hand of Alexander Shorokhov, who did not, as usual, integrate the magnifying glass directly into the sapphire crystal.
Like other unique pieces of the brand “Alexander Shorokhoff”, these two models also fit the philosophy of “art on the wrist” and are limited to only 99 pieces per dial color. 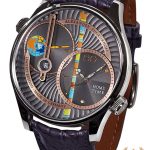 3.590,00 € (3.016,81 € excl. VAT.)
We use cookies on our website to give you the most relevant experience by remembering your preferences and repeat visits. By clicking “Accept All”, you consent to the use of ALL the cookies. However, you may visit "Cookie Settings" to provide a controlled consent.
Cookie SettingsAccept All
Manage consent