Dedicated to the Mexican artist Frida Kahlo and paired with a great story, the automatic watch “Los Craneos” with two time zones has delighted watch lovers from all over the world from the very beginning.

Limited Edition of only 47 pieces.

Mexico at the beginning of the 20th century; It is the time of revolution; Not only concerning the state but also the field of arts. Diego Rivera, José Clemente Orozco, David Siqueiros and Frida Kahlo have revolutionized the Mexican art with their independent, avant-garde and for this time colourful nature of paintings. They all became world-famous artists.

In 2017, during his journey through Mexico, Mr. Shorokhov visited museums and sites, where these artists lived and worked. He was fascinated by the power of their paintings and the blaze of colour, by the exposure and creativity, as well as of their inimitable and national character. He was especially impressed by Frida Kahlo, who had a spectacular but dramatic life full of pain and passion. In 2018, Alexander Shorokhov dedicated his new watch “”Los Craneos”” to her.

Two items serve as main motif for this watch: The skulls and the tapering metal appliqués on the dial. Both elements represent the fight of Frida Kahlo against death. Furthermore skulls are deeply rooted in the Mexican culture as a symbol for gambling with life and death. This watch models name means Skulls in Spanish. The manifold pyramidal tapering metal elements at the dial symbolize the painful corset of Frida Kahlo.

“Los Craneos“ is made as a double-time watch. Placed on one time zone is the calendar, on the other time zone a central second hand is placed. The case is of solid stainless steel with brushed sides and a hand-polished high-gloss bezel. This watch model is limited to only 47 pieces. The same number of years Frida Kahlo has delighted people in the world with her artwork. 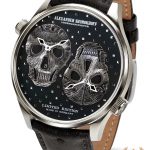