Limited Edition of only 39 pieces.

A tailor-made watch for a historical beauty

Newport is a seaside town in Rhode Island, the United States of America. It was founded in 1639 and is known as New England’s summer resort and famous for its historic mansions. It was an important port city in the 18th century and also houses a large number of preserved buildings from the colonial era of the United States. At the turn of the 20th century, many of the nation’s wealthiest families spent their summers in Newport.
Alexander Shorokhov knows the rich history of Newport and the revolutionary movement. Philosophy and cultural influence combine both. Thus a wonderful idea was born, which led to a remarkable collaboration: a special Newport watch, for the American dealer Ray Grenon, designed by Alexander Shorokhoff. For many years, Ray Grenon’s About Time Luxury Group has represented the Alexander Shorokhoff brand on the North American market. It is a very successful, as well as friendly and long-term cooperation, because both partners are very active and creative.

The first limited edition: “Lady Newport 1” and “Gent Newport 1”, was dedicated to the history of this unique and beautiful American city.  Especially to the very famous time of industrialization in America, to the time of the Great “Gatsby”.

The idea was to create a historical symbol of Newport on the dial to preserve an industrial flair of the 1920s. The dial with the beautiful hand-engraved mansion – the Seafair Villa – plays the main role on the dial, as the production is very complex. It is made of sterling silver and has been blackened to preserve the three-dimensional look. The lettering above the building was manufactured in an industrial manner and fits perfectly into the overall picture. For the ladies’ watch, 4 diamonds at the 12, 3, 6 and 9 o’clock position adorn the noble dial. 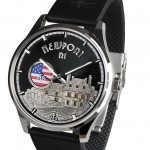