LIMITED TO ONLY ONE PIECE

UNIQUE: GOLD TOURBILLON AT A STEEL PRICE!
The anniversary tourbillon by “Alexander Shorokhoff”

In 2022, the “Alexander Shorokhoff Watch Manufactory” celebrates the 30th anniversary of its existence and this is to be celebrated first and foremost with new, exclusive watches. At “Alexander Shorokhoff” people find a home who prefer extraordinary design as well as sustainable values; extroverted glamour and Chi-Chi.

Watches from “Alexander Shorokhoff” are handmade, so they are not mass-produced and accordingly carefully processed. The anniversary tourbillon AS.UNIQUE0.30 – “TOMORROW GT22“ is a unique piece, designed and manufactured by masters of their craft and by Alexander Shorokhov himself. This model adorns the UNIQUE0 – collection as a special highlight.

The design of this unusual watch is not subject to short-lived trends, but meets the high demands of educated, culture-savvy, self-confident individualists. The Tourbillon Tomorrow GT22 is defined first and foremost by its eye-catching appearance, as well as by the highest level of workmanship and a comprehensible, fair price/performance ratio, which is also intended to underscore the character of the brand from the point of view of value retention.

The design of the tourbillon fits very well with the orientation of its successful watch line “Avantgarde”. First designed for the 25th anniversary of the manufacture, the unique piece was once again upgraded for the 30th anniversary and brought to a high level of craftsmanship.

The hand-engraved and gold-plated dial design can be interpreted in various ways and resembles a spider web, a bat or something similar. The view side has a decentralized design. That is why Alexander Shorokhov puts the initial lines not in the center of the watch, but on its logo. The lines show their originality and thus reinforce their own meaning. The lower part of the dial has a pleasant blue hue with a sunburst finish, and through it succeeds in making the hand-engraved elements stand out even more. Despite the many elements, the time remains easy to read. Each line of the upper dial leads to a triangular hour marker, granting a clear division of hours. The hands are made of 18-karat red gold.

The noble model, which reflects another milestone in the history of the family-run manufactory, will be offered in the company’s own online store during the period from September 10, the company’s birthday, to September 17 at an anniversary price of 29,930 euros.

A tourbillon that offers no comparison to the craftsmanship, made of 18-karat red gold at the price of stainless steel, there has never been anything like it! Quite the opposite. The tourbillon is definitely “state of the art” in the premium sector and therefore also guarantees an unprecedented sustainable value retention.

Unfortunately, this offer does not last. Every day the price increases by 200 euros until it reaches its actual value of 49,900 euros at the end of the year. Therefore, the potential buyers and lovers of something special should not hesitate too long with the decision of purchase.

This exceptional timepiece is limited to 1 piece worldwide and dedicated to the 30th anniversary of the Manufacture. 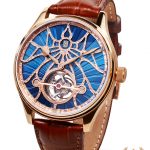