LIMITED TO ONLY ONE PIECE

For the thirtieth anniversary of Alexander Shorokhoff watch manufacture, many new, unique and creative models will be released. Most of the models will be produced with a limitation of only 30 pieces, which is fully in line not only with the anniversary, but also with the brand philosophy of producing limited works of art.

However, the special feature of the 2022 anniversary year will be something else. Unique and quite exclusive and only for the anniversary year, “Alexander Shorokhoff” will design a total of 30 unique one-of-a-kind pieces with a limitation of only one piece!

The first model of the anniversary collection “UNIQU30“ is called “Orange Horse“.

Many world-famous painters, especially those who painted in the avant-garde direction, have dealt with the theme of the horse. For example Franz Marc with the “Blue Horse I” or Pablo Picasso with his world famous “Guernica” or also Wassily Kandinsky with the “Abstract Horse”.

Alexander Shorokhov has also dealt with this theme and for the first time a horse also appears as a motif in his collection. It glows in a strong orange, an expressive color often used in avant-garde art.
In its execution, the horse expresses a certain independence, pride and courage to be different. Alexander Shorokhov wanted the depiction to be as close as possible to his sketch, as if it had been painted by hand. That is why there are very simple and free black lines on the horse, which come from Alexander Shorokhov’s pencil. The handwriting of a real artist. The landscape and the sky surrounding the horse are painted in green and blue colors.

To give this “painting” a certain “naturalness” and “mobility”, the entire dial was made of high-quality mother-of-pearl. The landscape, the sky and the horse were composed of different individual parts. The clouds were printed in gray.

With all due respect to the artistic point of view, which, of course, is in the foreground, Alexander Shorokhov does not lose sight of the mechanical aspect. In the center of the clock, in a round circle, is the hour hand. There, the hours are accurately read with the help of a small blued hand, which fits exactly into the round circle. The minute hand, which has the usual length, is also blued. The second hand, which is given an orange color to match the horse, is reminiscent of a pen. Alexander Shorokhoff’s trademark, the mighty number “60”, is in its usual place.

The total work of art comes in a rectangular case, like a picture in a frame. The watch is powered by a Swiss movement, Klaiber ETA 2892/Selita 300 with a hand-engraved rotor. The watch comes with two straps: A rubber strap and a genuine crocodile strap, to emphasize both the sporty feel and elegance.

There will be a total of 3 unique models of this watch: One model will be made of stainless steel case with real gold wire, the second model will be IP black plated with enameled stripes on the side of the case, while the third version with gold plated case will also be available with enameled stripes on the side. The uniqueness and extraordinary creativity of this model will certainly increase the value of this watch and should therefore be considered as an investment object. After all, who knows whether this “art object” for the wrist will not one day fetch similarly high prices as Kandinsky, Klimt or Picasso today. 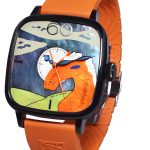