All good things come in twos!
The new NEVA CHRONO by “Alexander Shorokhoff”

Limited Edition of only 100 pieces.

ALL GOOD THINGS COME IN TWOS!

In 2021 Alexander Shorokhov presented the new model “NEVA”, which he designed during a business trip to Saint Petersburg. He was inspired by the mighty and most water-rich European river Neva. This is a 74 km long river in Russia, which flows from Lake Ladoga into the Neva Bay of the Baltic Sea, passing through Saint Petersburg.

From this inspiration the wavy guilloché dial was created and the new model included a colorful palette of many different finishes with dials in blue, yellow, red, silver and green. These new NEVA models established themselves as the perfect entry level models for a high quality mechanical watch from Alexander Shorokhoff.

Many of the models have since sold out, which also speaks to the low quantity at the time, and so Alexander Shorokhov decided to expand this rather classic line for him as an automatic chronograph version and breathe new life into it.

The wavy guilloché of the dial is also included in the chronographs. This is transferred to the upper and somewhat smaller dial. The hour markers are punched out there.

The small curved second hand in the shape of the letter “N” which is also not missing in this version, refers to the name of the watch, as well as the magnificence of the city of St. Petersburg through its curved shape. The silver hands create a shiny contrast to the colorful appearance of the dial, making it easier to read the time. In total, the new chronograph “NEVA CHRONO” will be available in three different colors: BLUE, GREEN and RED.

Furthermore, the beautiful automatic chronograph offers the familiar features of the Avantgarde line: the large number 60, the silver-colored “Alexander Shorokhoff” lettering, which this time has been displayed as an application, and a pressure resistance up to 5 bar. The 43.5 millimeter large and 14.4 millimeter high stainless steel case houses the hand-engraved and refined caliber 2030.AS (base 2030 Dubouis Depraz) with a hand-engraved and refined rotor and, as always, offers a stop and totalize function at 9 o’clock.

The dials are color-coordinated with the bracelets made of fine crocodile leather or calfskin. Each model is limited to 100 pieces. 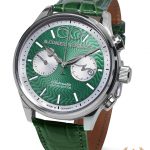 2.795,00 € (2.348,74 € excl. VAT.)
We use cookies on our website to give you the most relevant experience by remembering your preferences and repeat visits. By clicking “Accept All”, you consent to the use of ALL the cookies. However, you may visit "Cookie Settings" to provide a controlled consent.
Cookie SettingsAccept All
Manage consent