Enchanting and stylish, magical and aesthetic: the new NEVA by “Alexander Shorokhoff”. The new NEVA by Alexander Shorokhoff. The wavy guilloche on the dial is inspired by the migty and most water-rich European river Neva. The small, curved second hand is shaped like the letter “N” and thus refers to the name of the clock and the magnificence of the city through its curved shape.

Limited Edition of only 49 pieces.

Due to high demand delivery in September!

Enchanting and stylish, magical and aesthetic: the new NEVA by “Alexander Shorokhoff”.

Inspired by the mighty and most watery European river Neva, which flows through Saint Petersburg, are also these latest successors of the new NEVA series.
The wavy guilloché of the dial and the small curved second hand, which bears the shape of the letter “N” and thus refers to the name of the watch, remain as in the previous models. At the same time, this series is completed with two last variants in a stainless steel case and with an IP-coated blue case.

These last color combinations were not chosen by chance. They are based on the magical “White Nights,” during which the sun does not set completely in the former tsarist city. From the end of May to mid-June, St. Petersburg becomes one of the most romantic cities in the world, as this makes it look like enchanted. The sun creates a unique light that flashes on the majestic cathedrals and the golden palaces, making them glitter and shine – a true light spectacle. Even at midnight, the twilight shows from blue to yellow, conjuring up an extraordinary atmosphere.

This blaze of color has been incorporated into the new “Neva” models. The yellow-gold hands, the calendar window and the famous large number “60” shine on this warm overall composition.  The rich blue and the delicate yellow harmoniously match each other. 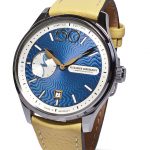 1.350,00 € (1.134,45 € excl. VAT.)
We use cookies on our website to give you the most relevant experience by remembering your preferences and repeat visits. By clicking “Accept All”, you consent to the use of ALL the cookies. However, you may visit "Cookie Settings" to provide a controlled consent.
Cookie SettingsAccept All
Manage consent